In this creative, social board game, players will journey around the land of Ooo and partake in absurd challenges on a quest to create the best dish from an array of wacky ingredients.

When playing this game, each participant receives a quest card, which they will have to try to fulfil as much as possible with their final dish.  However, they can interpret the quest however they’d like.

The game is played turn by turn. Each turn, a player rolls a die and can choose where they’d like to travel on the board. Then, if they wish to gain the ingredient on which they’ve landed, they must draw a Challenge card. If they complete the challenge described, they can take the ingredient tile and place it on their Player mat. The Player mat has words such as “sweet” and “spicy” that will affect the ingredient that is placed under it. For example, a fish tile placed under “spicy” will turn the fish into a “spicy fish”.

Some challenges require a player to compete with another player. If the player whose turn it was loses, the other player can chose to take the ingredient for themselves.

After five rounds, each player must describe a dish that uses all of the ingredients that they’ve collected and explain why the dish fulfills their quest card. Everyone then ranks each other’s dishes and the player with the most points wins the game. 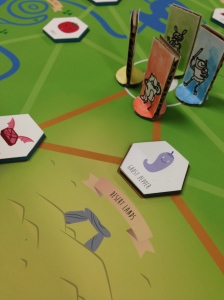 The game is good as an icebreaker for parties and can get pretty silly. It’s based on the cartoon “Adventure Time”, but players don’t need to know anything about the show to have fun playing the game. We found that the absurdity of the show is a theme that pairs with the game dynamics well. Players don’t even have to know much about cooking to play the game, but they do need to have some willingness to participate with others and to sometimes be ridiculous.

Our initial worries about the game were largely related to judging. We wanted the game to allow a lot of player creativity, but we had to think of a judging system that wouldn’t be overly problematic. To judge something so open/free as a verbal description of a meal, you can’t really use code or systematic mechanics such as point systems without taking away creative incentive.

Player judging is a solution, but it comes with the problem of bias. In “Apples to Apples” and “Cards Against Humanity”, there is player judging, but there’s also anonymity. In our game, we wanted players to be able to describe their dishes out loud, which made anonymity impossible. We learnt through play testing that bias wasn’t such a problem, as the weird challenges and the fact that each player had their own quest gave the gameplay a calmer and less competitive atmosphere. 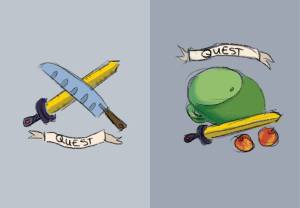 We were pretty happy with the look and the playability of the game. It inspired me to want to make more party games with social and creative aspects, especially with simple, easy to learn aesthetics- it’s a good way to quickly get people involved and together, even if it’s their first time playing the game.

A future version of the game could have more Challenge cards to increase replay value. If we wanted to add more fun elements, it could also include side quests. Expansion packs could include additional Quest cards and ingredient tiles. We could also give characters different abilities or attributes, so that there’s some strategy to the choice of characters.

This game was created by Anthony Rodi, Parth Soni and Sophia Niergarth.