Working on the vertical axis zoopraxiscope, has been challenging. To simplify the concept, I’ve broken it down into a few key elements.

The less commonly heard-of phenakistoscope consists of a disk that one spins and holds up to a mirror. On one side of the disk (the side facing the mirror), there are animation panels all around the border. Between each panel is a thin slot cut through the disk. As the disk spins, the viewer looks through the slots. For most of the time, their vision is blocked. When it isn’t, they get a quick “snapshot” of one of the panels.

Comparing the phenakistoscope, the zoetrope and a movie projector, a few common things emerge…

There are various ways of including that last element in my project. A slotted opaque disk the same size as the animation disk could spin at the same speed but opposite direction as the other disk, only letting the light through at significant moments. A similar opaque disk, but this time with holes instead of slots, and moving in the same direction as the animation disk, might also work. Finally, the light could actually just blink. However, the speed of the blinking would have to vary depending on the speed of rotation of the animation disk. This done with a circuit with a rotary switch type system where the rotary switch is spun by the same axel that is powered by the wind and that is spinning the animation disk. Considering all this, the simplest option is the opaque disk with the holes in it.

Further experimentation will have to be done in order to determine the optimal distances between the light, the two disks and the ground, as well as the brightness of the light.

Working on my animation of Alice, I decided that several things are going to change in the Wonderland to England transition. 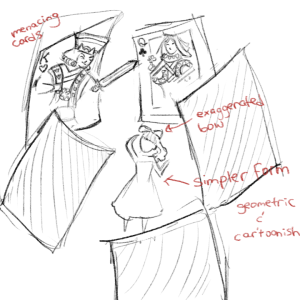 The initial setting is Wonderland. This will have a more simplistic, cartoonish style. Alice’s dress is more triangular, she has a disproportionately large bow on her head. The colours will be more vibrant. Illustrations such as the King of Hearts will be leaning and leering out of the playing cards..

Alice begins with a scared pose, which becomes more relaxed through the full animation until it resembles that of a sleeping person. Card illustrations gain more neutral expression and lean back into their card poses. 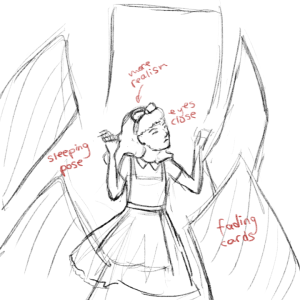 Cards begin to fade away and move out of the frame Alice is given more detail and is less stylistic than before. Her eyes close. 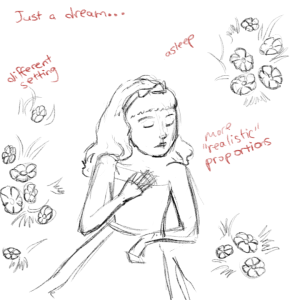 At the end of the animation, Alice is back home, asleep in the grass. Flowers, resembling those on the Queen of Clubs card, are growing around her. This is a subtle hint to the idea that Wonderland is a place that exists within Alice’s head and is derived from her memories of the “real” world.

The colours will be more subtle toward the end.

Recently, I’ve been thinking a lot about ideas of “home”, journey and transition- about what they mean to me and what they are shown to mean in media.

The image of Dorothy’s shoes tapping together as she wishes to go “home” is a particularly strong image. Quite similarly to Alice’s Adventures in Wonderland, Dorothy is pulled in a magical journey and then is simply transported home when she wishes it.

Stories can be quite odd in the way they portray travel. Characters might be helped home (or back to their old life) when they feel they can go no further. Sam and Frodo are lifted up by giant eagles, Peter sails Wendy home in a sky ship, the Pevensies follow a stag out of Narnia and become children again.

Never the less, watching these two stories, one can immediately identify with the feeling of surreality and homesickness that often accompanies travel (to a magic land or not).

As a continuation on my last post, here’s what I’ve been doing so far…

For a new set of blades, I modified a wind fan design that was sent to me from the Patching Zone to just to add some interesting curves and angles.

Flatter propellor-type blades spun much more easily than the more vertical design that I had originally intended to use.

My last frame was too difficult to modify, so I built another, this time out of adjustable wire and for one blade and one disk.

This allowed me to experiment with different disk designs as well as different distances between the light source and the disks and the ground. 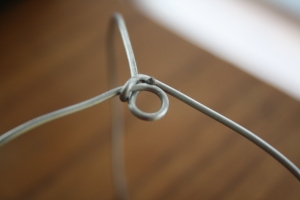 It was then that I figured I could make something like a zoopraxiscope , that 1870s “gif” disk invented by Eadweard Muybridge. However, one would look at the succession of images projected onto the ground instead of on a screen, and the speed of the animation would correlate to the speed of the wind.

(You can look at some photos of Muybridge’s work here)

Here are some images of my early experiments, just trying to get some dots to look like they were moving up and down by punching a spiral of them onto a card disk. 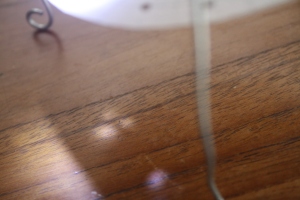 Some ideas for a wind sculpture prototype I’ve been building.

It has been interesting exploring the similarities- in design- between things like sails and animal wings.

I’m also excited because I unexpectedly get to make use of things I find around the house like those clear CD spacers.

The base and legs are made out of a fiberboard type material. The axles are aluminum tubes connected to long screws 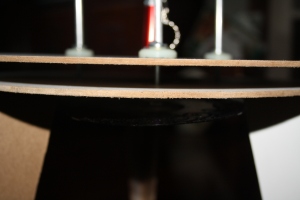 Each axle has two bearings (for stability). 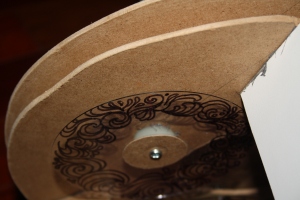 I’ve drawn circular designs on each clear disk to block the light. The disks also have a thin coating on them that makes cool little rainbows.

There are three disks, axles and legs.

While I think my construction communicates my ideas for a hypothetical sculpture, it wasn’t the most effective at actually turning in the wind.

In a possible future prototype,  I would: